This article came out in the Union Tribune a couple of days ago….

With one sunflower seed in each middle, the balls of clay were lined up like rows of meatballs waiting for sauce.

Instead, those seed balls, carefully rolled by students from Kathrina Mendez’s fourth-grade class at Central Elementary School in National City, were ready to be thrown into the garden.

It was all part of a lesson on the germination of seeds at Olivewood Gardens and Learning Center in National City. The seed balls are a way to protect the seeds from birds. They are often used when spreading seeds in areas destroyed by wildfires.

After the seed balls were distributed in the front gardens, the children headed to the larger back gardens to plant onions and into the 1896 Victorian Noyes House, to chop some of the garden’s harvest and help cook a meal.

The plan seems to be working.

The Central Elementary kids sliced fresh beets, plucked peas out of pods and grated cheese to make whole-wheat pasta with beet pesto and peas under the guidance of Chef Sara Polczynski, a volunteer who teaches cooking at the San Diego Community College Continuing Education Program.

Though most of the students hadn’t tried beets before, they liked the dish.

When the program started, kids weren’t always eager to try new things, said Chef Julia Darling, owner of Just Call Us Catering, Just Call Us Kitchen Rental and Just Call Us Volunteers, who has been coordinating Olivewood’s volunteer chefs for the past year.

“I had to implement the ‘No Thank You Rule,’ ” she said. At the beginning of each kitchen session, children have to pledge to take one good bite, before they can say, “No, thank you.”

“Now they can’t wait to try something new,” Darling said.

Dishes change weekly, depending on the harvest and the chef. All recipes are vegetarian.

“We try to be a place that inspires and motivates,” Carstensen said.

The catalyst for Olivewood Gardens was Christy Walton’s donation of her home and the surrounding 6.85 acres in 2006 to the International Community Foundation, a charitable organization that funds projects in Mexico. Christy and John Walton had bought the stately Victorian in 1985. After Walmart heir John Walton died in a plane crash in 2005, Christy Walton endowed the property with a few requests. One was that the lower gardens, which were planted with organic edibles while the Waltons’ son Lukas was battling cancer, be maintained.

The concept for the educational garden grew from there, and Olivewood was started as a separate nonprofit under the umbrella of the International Community Foundation. The first school groups arrived in February 2010. During the first year, 2,500 kids came through Olivewood, mainly from the National City School District.

Fourth-, fifth- and sixth-graders from nearby Central, Olivewood and Las Palmas elementary schools come four times a year so they can see the garden during different seasons.

The lower gardens are a jumble of flowers, fruits, vegetables and herbs — everything from roses to fava beans. Each section is fenced off by chicken wire, to keep the property’s one rooster and 18 chickens out of the plants. (Eggs are often on the menu, too.) The volunteer chefs, who range from high-profile restaurant chefs — including Katie Grebow of Café Chloe, Hanis Cavin of Kensington Grill and Joe Burns of Pamplemousse Grille — to teachers and food writers, often suggest things to grow.

“Everything we grow here goes to our hands-on cooking classes,” Carstensen said.

Collard greens and spinach are popular for pesto. “Kids love that dark-green, leafy pesto, and they have no idea how healthy that is,” Carstensen said.

A few “three sisters” gardens are growing in the front gardens. The Native American gardens are a combination of corn, squash and beans. Those three plants help each other grow. The cornstalks serve as the poles for the beans; the beans add nitrogen to the soil that’s good for the corn; and the squash is the ground cover to keep moisture in.

The front gardens, which were not part of the original home, were planted entirely by children and serve as an inspiration for urban gardens. Passion flowers create a walk-through tunnel, while brightly painted tires hold a variety of flowers, but no edibles because of toxins from the rubber. “We’re just showing what’s possible,” Carstensen said.

Mounds of compost in various stages of readiness are scattered throughout the property. Compost is a key ingredient to the organic growing process of Olivewood. Not only are all the table scraps on the property collected, Cucina Urbana delivers its scraps once a week.

Carstensen said she would like to get more restaurants involved in the composting process. “Composting turns dirt into soil,” she said. “Soil is living and rich in nutrients.”

Olivewood, which won the San Diego Architectural Foundation’s 2010 Orchid award for landscape architecture, also offers programs for adults. Free basic gardening classes are scheduled Saturdays in June and July. And Outstanding in the Field, which puts together farm dinners throughout the country, staged an event at Olivewood recently.

As word gets out, more parents are also coming on the field trips, Carstensen said. Return students talk about preparing the recipes at home, and parents are excited that their kids are eating vegetables they wouldn’t even look at a year ago.

Mendez said she sees that her students have a broader knowledge of fruits and vegetables and that they are more open to trying new things.

“It’s the right issue at the right time,” Carstensen said. 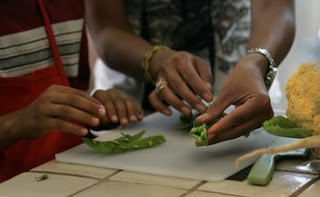 Teacher Kathrina Mendez shows fourth-grader Miguel Herrera how to separate peas from the pod in the kitchen of the Victorian home at Olivewood.