Skip to content
August 30, 2012 lydiawisz Leave a comment
The foods of Thailand use a mix of ingredients and spices that burst with flavor due to having the best of both Chinese and Indian culinary influences. Thai food stands uniquely on its own because it uses all of the flavor profiles that include sweet, salty, sour, bitter and spicy.
As in any other country, Thai food has several regions that use their own unique style of cooking and  usually has influences from the surrounding neighboring countries. In the Northeast for instance, Thailand is influenced by Laos and uses lime juice and Kaffir lime leaves; In the south, curries use more coconut milk and fresh turmeric and many popular dishes tend to have more of a Chinese influence.
A popular dish and one that I make often is Tom Kha Kai or Thai Coconut Chicken Soup.  I’ve used several different ones, and I also have used fish in this soup (cod) but depending on how spicy you like it, you can vary the ingredients. (In the picture I provided below, I used cod fillets instead).
This soup uses:
2 to 2 ½  cups coconut milk
2 pieces of galangal, cut in about 1 to 2 inch pieces
2 to 3 stalks of lemon grass (using the white part and in about 1 inch pieces)
5-6 Kaffir lime leaves, roughly chopped
About a pound of thinly sliced chicken breast
(If you use fish instead; make about 2 fillets)
2-3 cups chicken stock (for fish I use vegetable stock)
3 or 4 fresh thai chilies
¼ cup Asian fish sauce
1 tbsp. sugar
½ cup lime juice
1 to 2 tsp. chili paste
¼ cup chopped cilantro
I cook the chicken (or fish) in a pan over medium heat. I first place a couple of teaspoons of vegetable oil and about a clove or two of garlic and stir it around for about a minute; then, I add the chicken and lightly season it with Kosher salt and pepper, let it cook for a few minutes, then set it aside.
I combine a cup of coconut milk, the galangal (related to ginger), lemongrass, and kaffir (lime) leaves in a large saucepan and simmer it. Then, I add the chicken, chicken stock, chiles, fish sauce and sugar and continue simmering for about a few more minutes, or until your chosen protein is completely cooked.
I add the remaining coconut milk and heat it until it is hot, but not boiling. At this point, you can stir in the lime juice and the chili paste and simmer for a few minutes longer.  Once you’ve served it in a bowl, add the cilantro and I added roasted peppers on top. 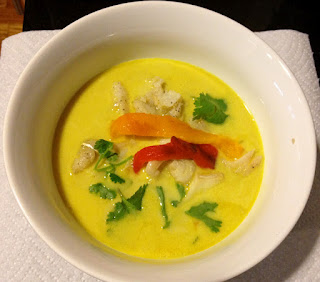