Skip to content
December 20, 2012 lydiawisz 6 Comments
The chill in the air makes me want to eat a good and hearty soup. Soup of pretty much any variety is great for me, although I do have some favorites — those that are rich, creamy and delicious, but also healthy for you. I got this recipe from the epicurious website for Potato Leek soup, although I “tweaked” it a little as I usually do just to add my own touch. The nice thing about this recipe is that it doesn’t take long to make either — so, it also can be considered a rather “hurried” process.
This is the Epicurious version:
In a large heavy saucepan cook the leeks in the butter with salt and pepper to taste, covered, over moderately low heat, stirring occasionally, for 8 to 10 minutes, or until they are softened but not browned. Add the water, the broth, and the potatoes, peeled and cut into 1/2-inch dice, and simmer the mixture, covered, for 20 minutes, or until the potatoes are tender. In a blender purée 1 cup of the soup, stir the puré into the remaining soup with the parsley, and season the soup with salt and pepper.
My version was similar, although I used two large Russet potatoes instead, only chicken broth a couple of Tbsps. of unsalted butter and about 1 tbsp. of curry powder, 2 tsp. of fresh grated ginger and a sprinkling of paprika. I used the same cooking method as the Epicurious recipe where I cooked the leeks in butter with salt & pepper and the rest is pretty much the same…. 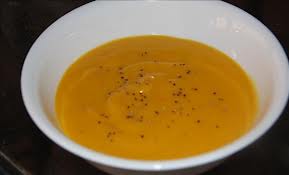